Optimal images can be obtained only in rare cases with the default settings of an ultrasound device. In conventional echocardiography an improvement can be achieved in imaging quality eg by adjusting the frequency of the transducer.

The key to informative images in contrast sonography is the mechanical index, abbreviated MI, which is displayed on the screen of every ultrasound maschine. It’s a theoretical measure of sound energy, which acts in the field of ultrasonic focus. 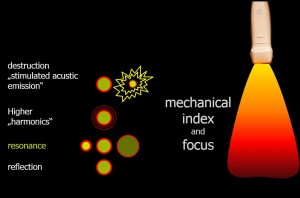 If ultrasonic bubbles are hit by only a low acoustic energy, the spherical surface leads to strong scattering. The reflected signal is weak, the picture remains dark.

Increasing the applied acoustic energy, resonance appears and harmonic frequencies are emitted by the bubbles. The resonance frequency depends on the bubble size: the smaller the bubbles, the higher the resonance frequency. Vesicles with a diameter of 5 microns have a resonance frequency of about 1.8 MHz, and those with a diameter of 2 microns of about 5 MHz. Only signals of the oscillating bubbles are strong enough to be received by the ultrasound probe again. Due to the low transmit power, the remaining cardiac structures generate only an “echo” when they are very strong reflectors, such as calcified structures.

A further increase of the ultrasound energy leads to increasingly higher harmonic frequencies. Finally, the bubbles will be destroyed. In this case a very intense ultrasonic signal is emitted, like a bursting balloon.

The destruction of bubbles starts in the near field of the ultrasound probe already above a MI of 0.2. In a conventional ultrasound examination MIs are used from 0.8 to 1.3, differing from vendor to vendor. Many bubbles are destroyed to a depth of about 6-8 cm, when conventional MIs are used. A contrast study therefore necessitates the reduction of the mechanical index. For the visualization of the left ventricle MI values ​​from 0.16 to 0.22 are common. Lower values ​​(0.08 – 0.12) are used to display the signal of myocardial perfusion. These values apply to GE equipment (Vivid 7), similar values are common for other vendors like Philips (IE 33).

Swirling denotes the occurrence of turbulence of the contrast agent instead of a homogeneous opacification. This phenomenon can be triggered not only by a contrast agent destruction due to high mechanical index, but also by a too low concentration of contrast media, especially in combination with low flow velocity in the ventricle, for example in the area of ​​a anterior wall aneurysm.

As a remedy the first step is a reduction of the mechanical index (eg value of 0.08 – 0.2). In the absence of improvement the next step consists of an additional bolus of the contrast agent.